An exemplifier of hard work, grit and dedication, we know "Dhananjay" as the third son of Queen Kunti,and a dear friend of Lord Krishna. His archery skills are legendary, but they did not come to him overnight. His eye was always at the eye of the bird, or the fish in the pond, which in this case was the coveted title of 'The Best Archer in the World' or 'Sarvashreshtha Dhanurdhar. His commitment to beingthe best had led him to take the hardships head on, and surpass them to come out on the other side,even stronger. Dhanaanjay was first name of Arjun in the order of all his 10 names, (viz. Vijay,Shwetvahan, Phalguni, Kirti, Vibhatsu, Sabyasachi, Gunakesh (one has won over his sleeps), Parth,Jishnu, Kaunteya) had earned a distinctive name for himself in mythology not because he was a royalblood, but because despite being so, he was able to achieve victory over all those encounters of life,which bring a person down in life.

The reason why "Dhananjay" has been chosen as the name for CAN's Graduates project, is exactly that-him being the embodiment of hard work, grit and dedication. This project is a one of its kind initiative wherein, the Foundation wishes to encourage fresh graduates to join litigation right at the threshold of their professional lives. In acknowledgement of the hardships faced by new entrants, particularly but not limited to first generation lawyers, both in case of finances and connections, CAN will invite applications which after verification and interview by an independent panel of eminent lawyers and academics will be paid a monthly stipend. Some of such candidates may even be placed with lawyers with roaring practices and Senior Advocates.

With the opportunity and means provided, CAN hopes that the such newly planted graduates in legal field will try their level best to emulate the values of "Dhananjay", with their Iris always focused at the mark, that of excellence at the Bar and contributing to the nation. 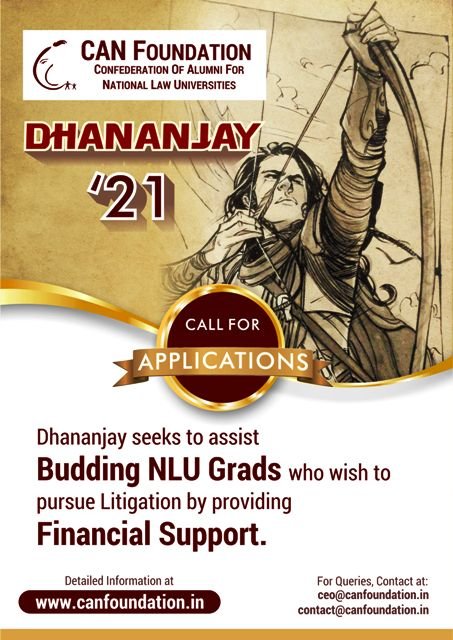 Late Prof. N.R. Madhava Menon had set up the first National Law University of the country with the goal that the Institution shall mould the Future Harbingers of Justice. In an attempt to realise his Vision, the CAN Foundation is pleased to announce the 2nd edition of Project Dhananjay.

Under Dhananjay 2020, 4 Scholars from National Law Universities (NLUs) who were in need of financial assistance, were accorded a monthly scholarship stipend ranging from 15K to 18K per month for the duration of a year.

We plan to expand the project this year and hence under Dhananjay 2021 we seek to assist 5-6 Young, Meritorious Scholars who wish to pursue a career in Litigation. With the times of COVID adding onto the apprehensions that exist about the uncertainties of the field, we hope that the Scholarly Stipend helps alleviate such fears.

While we planned to launch Dhananjay 2021 earlier this year, however, due to the unforeseen Second Wave of the COVID Pandemic, we had to delay the launch of Dhananjay 2021. However, we are immensely grateful to launch the Project just in time for the graduation of the Batch of 2021.

The Foundation is immensely grateful to its Patrons, Donors and Well-Wishers for their continued support and blessings throughout and especially during these trying times without which it would not be possible for it to engage in such philanthropic activities.


EXTENSION OF APPLICATION FOR PROJECT DHANANJAY

This is to inform all interested candidates that the last date for the submission of application for Dhananjay '21 has been extended to 04.06.2021 till 5 PM.

No applications will be entertained post the deadline.
However, all other terms and conditions of the application process including eligibility criteria, qualification etc. for applying for the project remain unchanged. 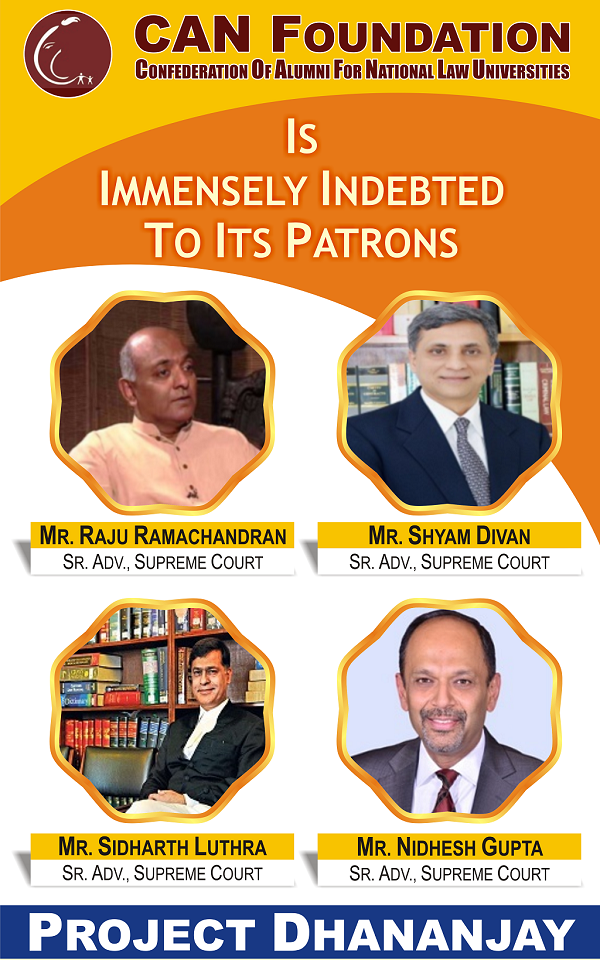 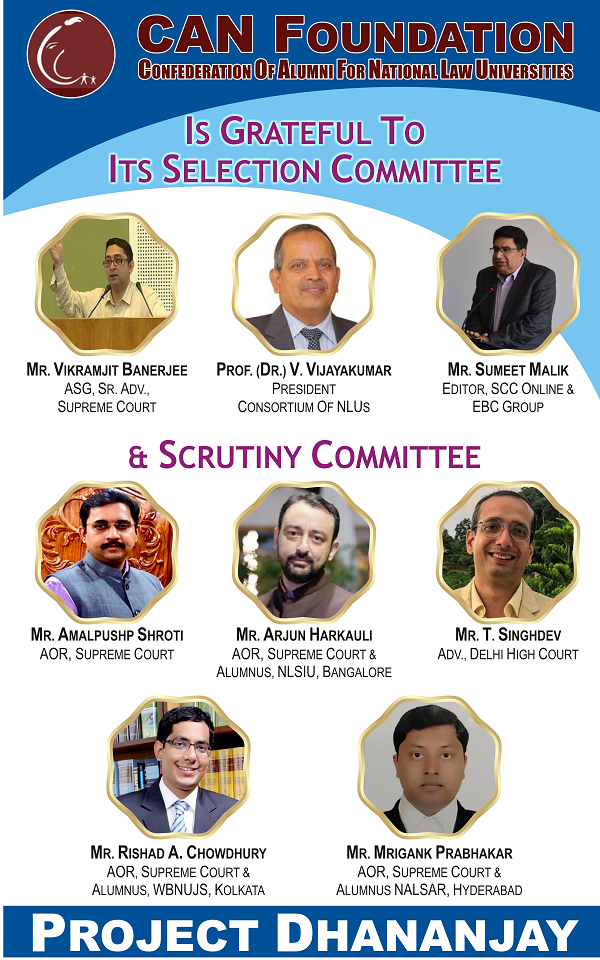 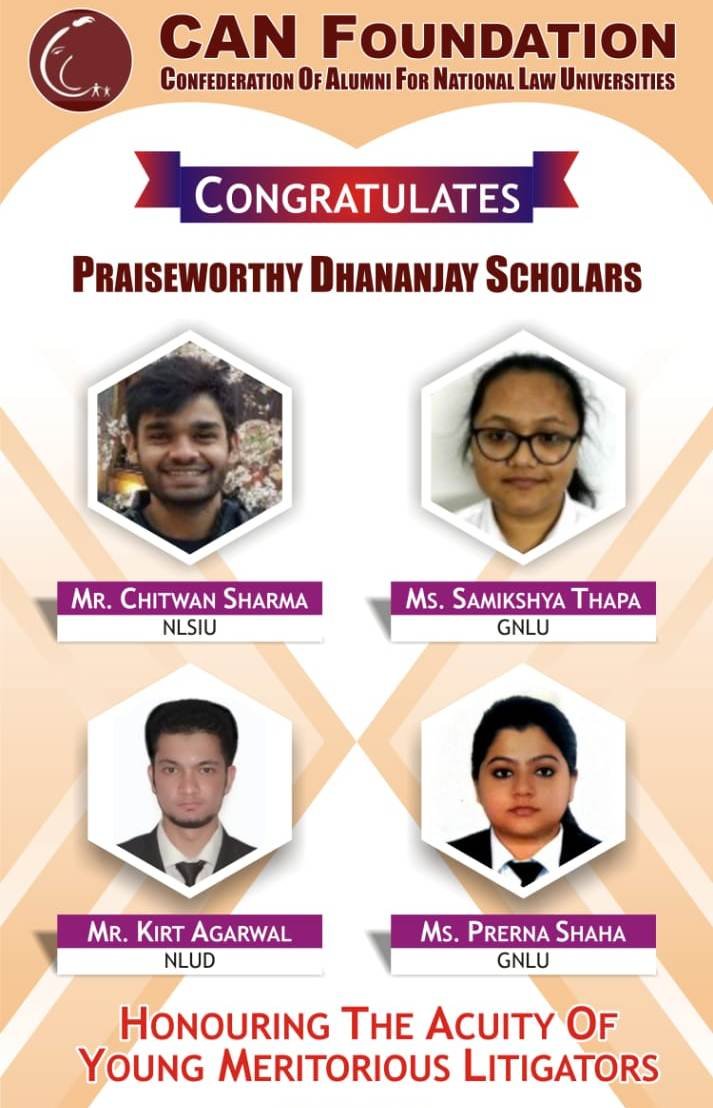 If you wish to have a perusal of the copy of the detailed summary of the Committee Reports, individual profiles of the Scholars along with the relevant information, please feel free to mail us at [email protected]. Keeping the privacy of the Dhananjay scholars in mind, we request you to add the following details in your respective mails, as mentioned below:-

This would allow us to keep a track of the number of people, we are sharing the aforementioned personal information about our Scholars with.